I’m sure you followed our live posts from this year’s edition of Prolight & Sound Frankfurt with great anticipation, but if you’re in further need of a rundown of this year’s hottest audio news from the show, then look no further.

Frankfurt is always a hotbed of activity when it comes to the launch of new products and updates, and this year was no exception. However, for many companies, it has to be noted that this year’s edition seemed to have a much heavier focus on “updated” or “regenerated” products than brand new releases and technological advancements. Of course, there were several companies using the show as a platform to launch brand new technology to the market, but from our standpoint, it’s certainly safe to say that Frankfurt is no longer the ‘one-stop shop’ for product launches that it once was. With more and more technology specific fairs taking place across the globe, it seems that companies are focussing their new releases to the specific demographics of the attendees of these shows. 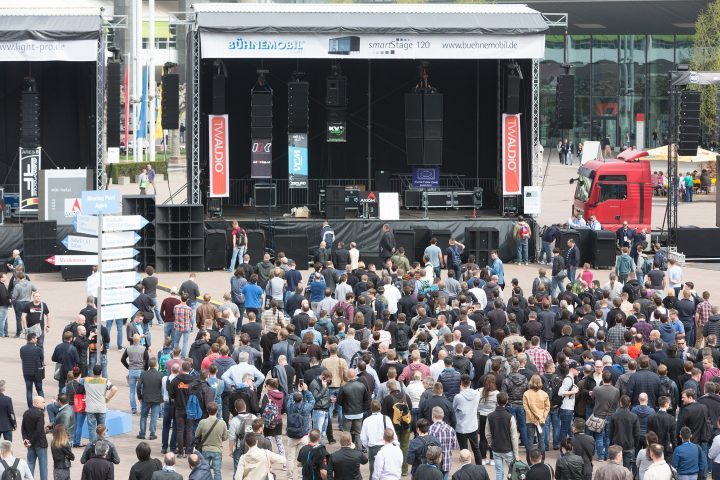 Many big players in the audio industry, for example Meyer Sound, Music Group (Behringer/Midas/Turbosound/Lake/Lab.Gruppen) Shure and Sennheiser, were not present at this year’s show, with the companies making an active decision to spend their budgets on more specified shows and purposes. However, by no-means should this suggest that there weren’t numerous welcomed and intriguing products to review at the show, but there is a notably heavier focus on product development and refinement.

Let’s start with the product type that probably stands on the most stands within the audio halls – Line Arrays. Though this is a technology that is by no means new to the market, the adoption of these systems is really now starting to become saturated, with similar looking products littering the show. Of course, this relentless trading of technology and techniques can come at a cost to the companies that develop and gain revenue from these systems, but in our opinion this situation can also have great advantages to the industry. There is never time for developers to settle and rest on their laurels when it comes to the development of these systems, with the continuous threat of competition encouraging on-going research and development, and a constant strive for improvement, not just in terms of loudness and quality, but also efficiency and reliability.

From Coda Audio, we have a APS, or “Arrayable Point Source”. This system is designed to combine the user-friendliness of a point source with the array-ability of a line array. This means that APS could potentially addresses the limitations of traditional point source systems, by offering the flexibility of multiple uses and applications within small to medium events. 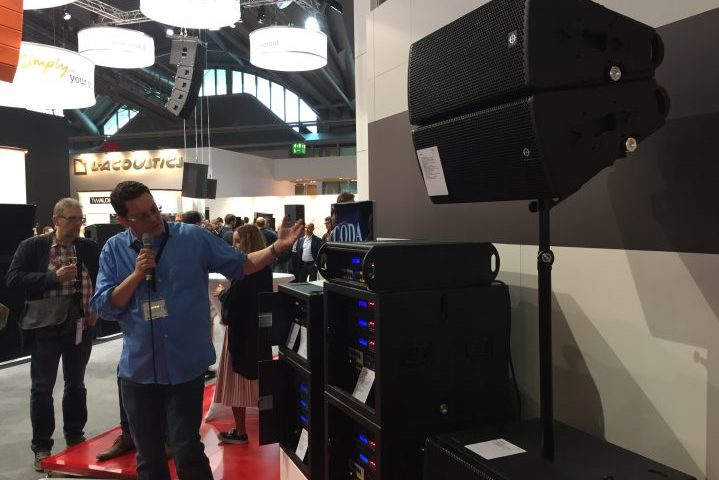 The APS system currently comprises of a 2 x 10″ 3-way arrayable loudspeaker, and APS-SUB, an 18″ high output compact subwoofer. The arrayable section features dual 10″ neodymium ultra low distortion cone drivers, and a DDC driver for the highs. The system is capable of producing 137 dB is the Lows, and 146 db in the High/Mids. The coompact 18″ APS-SUB extends the frequency range down to 28Hz, outputting a maximum peak of 138 dB.

Continuing the focus on Line Array technology, we have the HDL 30-A from RCF. Building on the company’s hugely successful HDL 20-A, but certainly not aimed as a replacement, the HDL 30-A is a compact bi-amped 2-way active touring system for medium to large events, both indoors and outdoors. 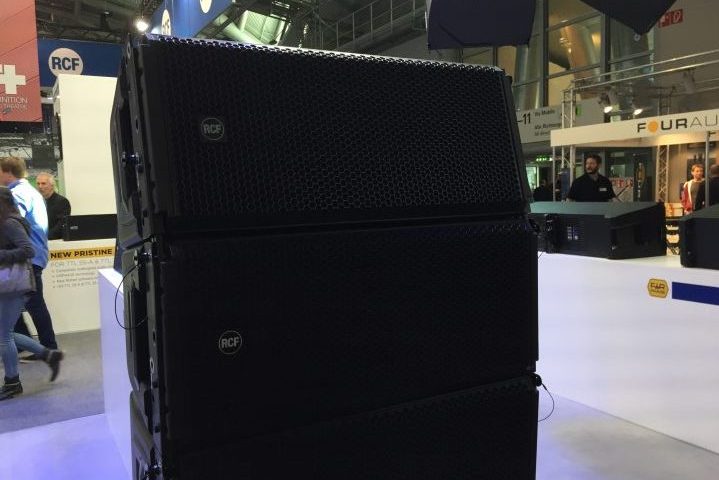 Thanks to the built-in 2200W, 2-way class-D amplifiers and a high-power DSP, the unit is capable of producing a max of 137dB SPL. A consistent level or reproduction is assured throughout the frequency spectrum, thanks to a new processing technology from RCF, known as FiRPHASE. This feature can also be found on many other new products from the company, which have been announced at Prolight & Sound.

Axiom Pro Audio, from Proel, also used the show as an opportunity to launch their latest offerings to the loudspeaker market, with the new AX800A, a High Output, Powered, CORE Processed, Two-Way Line Array Element. Axiom describe the cabinet as organically moulded, designed for a wide range of applications from indoor and outdoor live sound applications, to installation. Powered by a DA SERIES digital power module, the low frequency section produces 900w, with an additional 200w for the high frequency compression driver. For extended low frequency response, the AX800A is designed to be used in conjunction with SW1800A, a compact dual 18” hybrid subwoofer.

And perhaps the largest audio release here at the show, and breaking the mould of purely updating, we have Martin Audio with the introduction of an impressive TEN new products to the market. 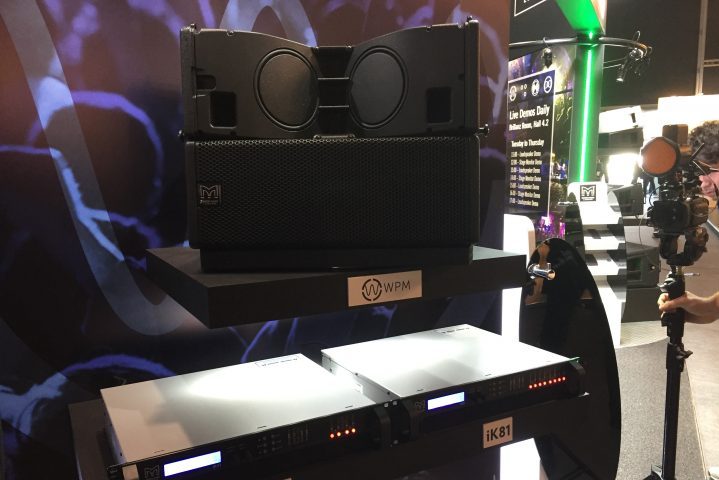 At the forefront of Martin Audio’s new line array technology is scalable resolution. Using the company’s DISPLAY software, users will be able to make a decision on the level of resolution and control that is right for the install, client or event. A greater resolution, or more individual control over the array in terms of individually driven enclosures, means that DISPLAY can precisely fine-tune audience coverage and hold the frequency response and SPL’s throughout the venue within a tight window specified by the user.

Next up, control, and something completely new and exciting from Outline, who officially presented their “Multi Media Nucleus”, Newton, at Prolight & Sound 2017. Newton is a full-featured, FPGA-based multi-function processing and control unit, designed to take technology convergence for audio-visual systems to the next level. Newton not only features the comprehensive loudspeaker system control facilities that one might come to expect from this type of unit, but also offers media conversion, sync and clock management plus audio distribution with networking capability. All of this comes in a package that provides an exceptionally high i/o count of up to 216, simultaneously in both directions.

Keeping the focus on system control, we had the first chance to take a thorough look at AURORA NET, dBTechnologies’ new software developed for advanced control and monitoring of the company’s professional audio systems. More than an evolution of its predecessor, dBTechnologies Network, the new software functions via Ethernet cable, allowing it to achieve detailed DSP control while managing digital audio via Dante™ protocol. The software is cross-platform, running on everything from Windows to Linux to Mac, and has clearly been very carefully designed and optimised to work on touch-enabled devices such as tablets and netbooks.

Looking at consoles, we saw several companies updating or adding to already successful lines of products. Firstly, DiGiCo, who followed on from the success of their SD series of digital consoles with the announcement of their latest addition, the SD12. The SD12 features 72 input channels, 36 aux/group busses, and a 12×8 Matrix, all with full processing. 12 FX processors are including in the console, as well as 16 graphic EQs and 119 Dynamic EQs, Multiband Compressors and DigiTubes. There are also 12 VCA Control Groups available. Featuring two 15″ touch-screens with an intuitive user interface, the console has built in recording interfaces for virtual sound checks.

Solid State Logic expanded their range of digital live consolesat Prolight & Sound 2017, with the addition of the SSL Live 200. SSL Live consoles have had increasingly positive responses from the industry since their launch a few years ago. This new mid-scale console from Solid State Logic promises to provide the outstanding sonic performance of SSL to a much wider target market. 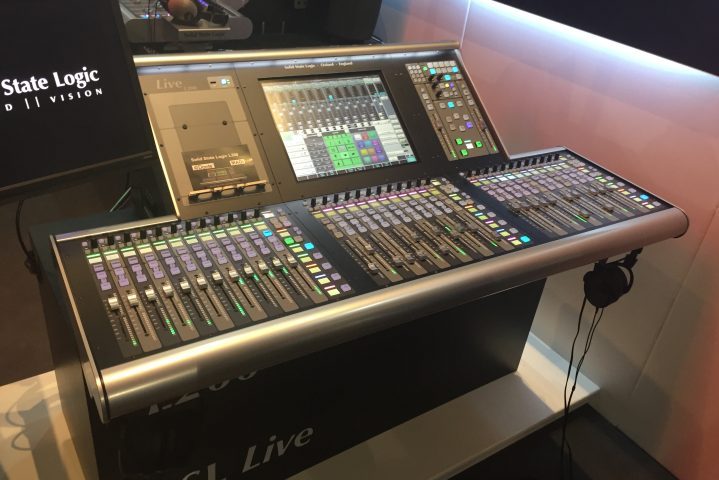 Three sections of 12 faders bring the consoles total fader count to 38, including the master and focus faders. a 17″ multi-touch and multi-gesture touchscreen gives quick and convenient access to the consoles functions, and combined with the inverted T-Shaped chassis design of the console provide a speedy and intuitive workflow. The console provides 144 processing paths, all of which have full processing, which can be configured as up to 96 input channels, up to 48 aux sends, up to 24 stem groups and 6 masters.

And last but by no means least, we have an exciting release from Riedel for audio communications, with Bolero, a state of the art, next-generation, fully artist-integrated wireless intercom system. A full-roaming, DECT-based intercom system in the license-free 1.9GHz frequency range, Bolero is fully integrated into Riedel’s Artist digital matrix intercom platform, providing both a wireless beltpack and wireless keypanel. Also, Bolero is one of the first wireless beltpack systems in the industry that can also act as a walkie-talkie radio, with built in speaker and microphone. Oh, and it’s also worth mentioning… the belt-clip on the back can also be used as a bottle opener. Who says there were no revolutionary ideas at this year’s show?

So, there we have it. Another busy show, and although no breathtaking, radically game-changing ideas were presented to the market, there was certainly plenty to talk about. Arguably, this show was really focussed and tailored to the professional, with products updated and adjusted based on the experience and feedback of their users. For the technologically focussed, Prolight & Sound Frankfurt is still an essential event on the calendar.