Ever since 1992 when Marc Brunke, founder and managing director at Optocore GmbH, built his first fibre optic system and was awarded first prize for the optical snake system at the prestigious competition for young engineers in Germany, “Jugend forscht”, he has consistently pioneered new technologies and standards. A prime example of this is Optocore’s recent development of MADI over Cat5 — which extends the AES10 MADI standard by allowing twisted pair Cat5 connectivity. Being such a heavyweight in digital audio networking it was no surprise that he was nominated again to deliver an AES keynote, this time on audio networking for theatre, that he presented at the 139th AES Convention, as part of the Live Sound Expo, at the end of October 2015.

In this week’s Editor’s Corner Marc Brunke gives us some deeper insight into Optocore’s digital networking technology, and explains the great advantages of using it in various applications, not only for professional audio, but as a fully integrated IP based workflow, compatible with video, intercom, light, and data transportation.

ZioGiorgio.com: Can you explain to us, in a few words, the central idea of your technology?

Marc Brunke: The central idea is to deliver a network or point to point transport via fibre or copper for professional audio applications. Professional audio has a number of unique needs, like requiring guaranteed delivery, with low latency and the transportation of word clock values. Only proprietary systems or open AES standards can satisfy these needs. We’ve chosen to operate our system based on open AES standards, so that it can be used by other manufacturers. As result, the system is easy to operate, easy to interface and highly future-proof. Since 2004 we have also been able to transport IP based control data, which has set the trend towards fully integrated IP based workflow in our industry.

ZioGiorgio.com: What are the benefits of fiber?

Marc Brunke: Fibre has a high bandwidth, provides electrical isolation which eliminates humming, is easy and cost effective to install, works over long distances, and is compatible with future technologies so once installed it can be used for decades. 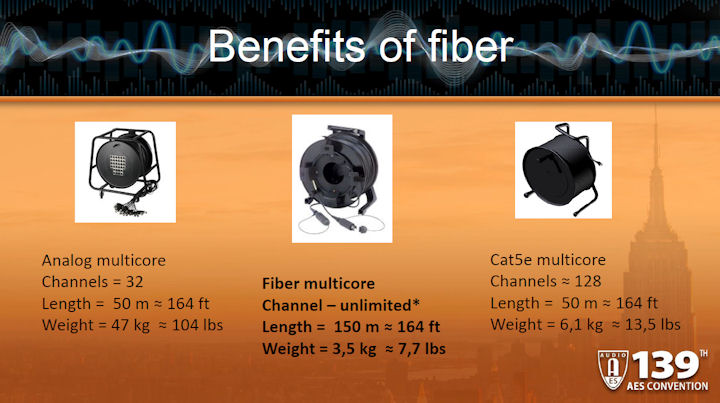 ZioGiorgio.com: The headline “Fibre – motorway for all signals” was one of the points of your AES keynote, can you explain it?

Marc Brunke: “Motorway” means that all signal types – video, audio, intercom, light, control – and every manufacturer can use our “fibre motorway” – much like a road which is open to the public.

ZioGiorgio.com: What kind of redundancy is guaranteed from Optocore?

ZioGiorgio.com: How important is the word clock in a network system? For professional applications, who should give the master clock signal, and why?

Marc Brunke: Word Clock is very important. Without Word Clock, audio devices cannot synchronize and as a result we get buffer under-runs or overruns, resulting in “clicks”. There are “sample rate converters” to allow un-synchronised operation, but they can only be used rarely and in certain occasions because of the high latency and distortion they introduce.
The Master Clock should be chosen carefully and it is always dependent on application – it can be a dedicated device, networked system or the console. A good Master Clock makes a system more stable. Optocore has an extremely precise and stable word clock generator, and its quality goes far beyond other devices, even compared to dedicated “Word Clock devices”. So we always recommend to use Optocore as Master Clock, which also makes sense when your network is producing and delivering the clock, as everything becomes easy to connect.

Another topic in terms of Word Clock is the clock distribution and redundancy. Optocore distributes Word Clock to all external system components and it provides quick redundant switchover when the original Master is disconnected. All this happens in fibre domain which means there is no electrical influence on the Word Clock signal. With coax cables which were used in systems without networking, there was no such isolation).

ZioGiorgio.com: What was your AES keynote speaker experience like?

Marc Brunke: I’ve been an AES keynote speaker a number of times, as it’s important to speak about our research and results. Not many people have worked for 25 years exclusively on digital audio networks. I like the interaction with the audience and the feedback, and usually I can always announce things which are new.

ZioGiorgio.com: As with audio infrastructure in general, digital audio networking is more and more widely used in theatrical applications.Why is audio networking particularly interesting for theatres?

Marc Brunke: Let me quote Aaron Beck here, Head of Audio at Cirque du Soleil, responsible for Elvis and Michael Jackson’s One, which installed Optocore in their theatres in Las Vegas: “We chose Optocore in our theatre because it was cheaper than copper. Only after installation, we realised the power of the system, with the ability to make routing of audio signals “on the fly”, making changes in seconds instead of hours. Now I never have to say “no” to the stage manager anymore. We like it so much that Optocore has become a creative tool in our shows, making audio patch changes during the shows. Then, the quality of sound is so high that you do not hear anything – when the system is switched on, there’s no humming nor noise. Our operators were at first irritated from this fact, as they were used to check if a channel is “on” or not by listening to it’s noise floor … I will never do a show without Optocore again.” ZioGiorgio.com: Important theatres, opera houses and venues already rely on Optocore’s tecnology.
What are the most challenging aspects when building a complex network?

Marc Brunke: It used to be challenging without a network, or with an improper one. With Optocore, it gets simple – during construction, just put fibre everywhere a node can possibly be and then forget about it. During audio installation, just put a device suitable to your needs at the nodes and all devices get connected in a plug-and-play fashion. During a show, just program the audio matrix as desired.

ZioGiorgio.com: Technically, what are the differences in live production applications?

Marc Brunke: Live production regularly includes the movement of equipment and cables. So, the fibre cables are usually not the standard network cables but stronger harsh environment cables. For a number of cable and connector manufacturers, Optocore has developed strong connectors and cables for this purpose. For equipment, they are usually mounted in movable racks. Live productions benefit similarly from the Optocore features – installing a system without the need to know about audio routing, giving the ability to do routing on the fly, without humming, with word clock present everywhere, and a 150 meter multicore with 200 audio channels weighting just 4kg.

ZioGiorgio.com: What do you think is in the future of digital audio networking?

Marc Brunke: The future of digital audio networking is exactly what we are doing now: A fully integrated IP based workflow, compatible with video, intercom, light, and data transportation. Using open audio standards is the backbone, interfacing easily with many manufacturers of audio equipment. Remain using Ethernet for control, but stay away from Ethernet for the audio, intercom and video data.

ZioGiorgio.com: What do you think about wireless audio networking?

Marc Brunke: It works well for short distances and for a few channels. For a larger channel count, you will not get the wireless bandwidth, and wireless transmission is not secure and can easily be lost.

ZioGiorgio.com: What is coming next from Optocore? Are you on track for some new technologies or products? More MADI stuff? A new protocol maybe?

ZioGiorgio.com: It seems to be that there is still no “definitive” digital audio protocol. Why is this?

Marc Brunke: There are two – called AES/EBU and MADI. They are used in at least 99.9% of digital audio connections. There is just no company which “markets” these standards, so users forget about them.