It’s always a pleasure to meet people that work with creativity, quality and passion. Roberto Emmanuele, CEO & Senior Manager of MOVE GmbH, is one of them. He leads his team of specialists in event staging and live entertainment, with headquarters based in Frankfurt, Germany. With his long list of references, you soon see that MOVE is one of the leading German companies when it comes to show, music & media production. Roberto Emmanuele was born in Frankfurt, but as you can tell from his name, it’s not surprising that he has a dual citizenship (Italian/German). With this in mind, it seems no accident that his philosophy of show production is to combine creativity and emotion with the client’s corporate goals. Business meets art and media, and his technique for successfully staging an event is to show all the components working together in harmony.

ZioGiorgio.com: How, when and why did you found MOVE GmbH?

Roberto Emmanuele: I founded the MOVE GmbH in 1993, at the age of 23. Hitherto, in my younger days, I played piano and percussion and worked as a DJ in various Clubs in Frankfurt, and since the age of 8 I have acted in theatre. In 1986, at the age of 16, I received my German high-school diploma, and continued my educational training with an apprenticeship to become a Sound Engineer / Audio Engineer at a private school (SAE / School of Audio Engineering). It was a crash course of 18 months. After that I started to work as a freelance sound engineer in every possible area, like recording studios, but also mixing many bands at live shows. Then I went on to work for one year at Mercedes Benz, as a worldwide media engineer, producing multimedia presentations for Mercedes Benz and implementing them at international trade fairs. ZioGiorgio.com: What was the crucial point that made you think about establishing your own company?

Roberto Emmanuele: In all areas of my work I have always had involvement with the artists, technicians and businessmen involved in the productions. I noticed that these three different types of people are “wired differently” and often have communication problems:
– The Technician is always afraid that something will not work correctly, and needs 100% safety.
– The Businessman says that “there’s no such thing as impossible”, and always complains about the fact that everything “is much less complicated than it looks”, and even if it IS complicated, will say “what do I pay all that money for? Come on please, make it work”.
– The sensitive, emotional Artist needs good vibrations to perform well, and if he should feel stress or differences he is likely to say “I cannot work in this way” and is quickly insulted.

I always had the feeling that I could understand these 3 different personalities from their perspectives and positions, but I noticed a fundamental communication problem. By providing a little talent on my side to be able to understand them all, and mediate between them, something that usually became my role, I could satisfy all parts with expertise, and reassure them. So I thought: here is a need for a “interpreting company”, an agency, that can deal with and understand these three types of people, and get them together.
With this concept and intention, I founded MOVE GmbH.

ZioGiorgio.com: And this is still the core business of Move GmbH?

Roberto Emmanuele: Yes. We are still doing exactly this to this day. With our expertise we bring artist, technical production and businessman together, mediate between them, and produce and plan everything. We manage artists, produce music and visual media, plan technology, calculate and sell it, whilst always trying to keep in mind not just the customer’s objectives, but also the aspiration of the artist and the purpose of the technical parts. Our goal is to run everything as effectively as possible. 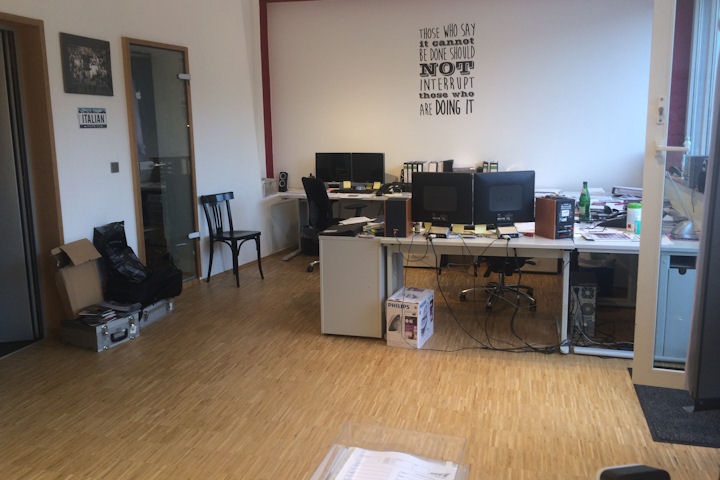 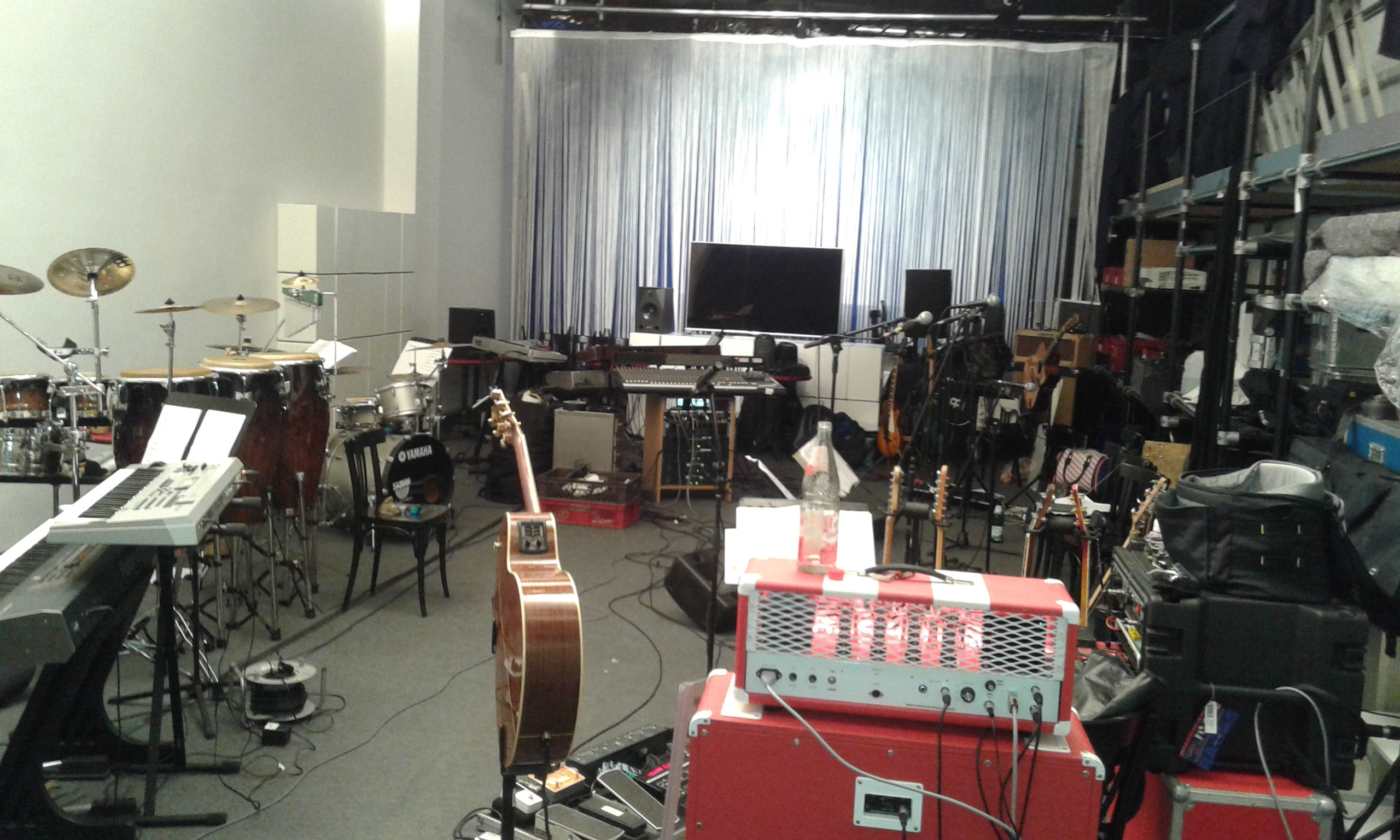 ZioGiorgio.com: How are your headquarters in Frankfurt structured?

Roberto Emmanuele: We have a team of about 10 permanent employees: three in the media division, one music producer, one video producer, one graphic designer, two people in the sales area, two artist and event managers … and me that holds the whole thing together. In addition we have our own multimedia studio where we can rehearse or record video and audio, as well as offices and appropriate public spaces. I think for good, creative work to happen, it is also important that the employees feel comfortable in the environment, because only then can they create something aesthetic or beautiful and harmonious.

ZioGiorgio.com: In the past you’ve been busy in a variety of sectors, how does these experiences affect your way of working?

Roberto Emmanuele: All my experiences have a positive influence on what we’re doing at Move. As you can see we do live music and theatre shows, as well as studio production, but above all we work in the area of industry events and presentation, like fairs etc. All areas obviously have their own focus and all areas help to grow one another. ZioGiorgio.com: How do the technical novelties affect the workflow?

Roberto Emmanuele: The technical achievements are of course unstoppable, especially since digitalisation. You have to stay on the cutting edge of technology in order to know what are the best current possibilities. BUT: I find it much more important, with the overflowing of technology, to not forget the essentials, and not to lose sight of the core of the matter. This core I see in the humanities and in natural things, and this never changes. For example: A good sound comes out of the fingers of a guitar player, and not from the mixing desk, no matter how many features it may have. The good atmosphere or vibe with the audience that the artist creates is with his charisma and personality, and not with his playing technique. And last but not least: The audience has the same sensory tools and sensitivity as ever. Man has only 2 eyes and 2 ears and longs for harmony and goosebumps. This is obtained not by technology, but by people.

ZioGiorgio.com: What is the current environment for the event staging and live entertainment business in Germany?

Roberto Emmanuele: It runs sufficiently. Germans are always skeptical, and the political situation and the interdependence of the world and Europe are fomenting fear and skepticism. So people are always careful, because of the fear of economical disasters or military conflicts, that could tilt everything very rapidly. Everyone is aware of this. But after the recent disasters of the financial crisis in 2009, in recent years the situation has been improving. Up until now, we have got away with just a black eye. ZioGiorgio.com: You have also developed the interesting program “Teambuilding with music”. What’s this about?

Roberto Emmanuele: I think the best medium to connect people is music. With the help of professional musicians as coaches, we use the music to show to companies and people that music in its origin exists to bring people together, and to give a society or a moment a form of expression. We show people that they can reach and experience new horizons in areas they didn’t know possible, but only if they let themselves get involved in new perspectives. As a friend of mine from Africa always says: Music is for everybody, not only for the musicians or pros!

ZioGiorgio.com: What are the last major contracts you have worked on with Move?

Roberto Emmanuele: We do many different things. We work a lot for banks and for the automobile industry, for example for the Sparkassen-Finanzgruppe or Mercedes Benz. But we have also recently worked on musical productions, like Hope! – The Obama Musical, a German musical inspired by the personal life and career of U.S. President Barack Obama, which was a big success. For Mercedes we have just produced a rock show with an international cast, under the musical direction of a Cuban musician as a bandleader. His name is Dany Martinez, an incredibly talented musician. Here we produced, under the title ‘Rock Giants’, a Rockshow with 8 musicians and 5 singers. ZioGiorgio.com: What will happen in Move’s near future?

Roberto Emmanuele: We have some interesting productions coming up, for example this Rock Giants show, as well as others, and also a long list of patrons, to whom we present our new shows.

ZioGiorgio.com: In the sectors of event staging and live entertainment, we often hear of  extraordinary and sometimes ridiculous or funny stories. Please tell us one of your favorite anecdotes …

Roberto Emmanuele: At the customer’s request, we have commissioned a “gypsy band” for the board meeting of a large automobile group. After the show one of the musicians sold a diamond Rolex wristwatch to one of the board members, for 5,000 Deutschmarks, in cash. It turned out that the watch was fake, and before too long the customer / board-member began to start questioning the watch and demanded his money back. By this time, however, the musicians were already back home, somewhere between Spain and France…