Powersoft D-Cell504 IS high power amplifier modules have been specified to drive a unique ‘Wall of Bass’ in an Austrian nightclub — as low as 7Hz.

The newly-reconstructed Club SUB, in the city of Wiener Neustadt, set out to integrate a perfect low frequency solution, capable of reproducing a wide range of live and DJ-derived music (Drum ‘n’ Bass, Dubstep and Techno) and arts presentations, as well as workshops and theatrical performance in a completely revolutionary way.

And since the 300-capacity SUB is located in a heavily populated residential area heavy emphasis needed to be placed on acoustic isolation to avoid noise pollution.

Project managers, Wolfgang Sauter (from Pro Performance) and Reinhard Nell (from Lambda Labs), were equal to the challenge.

Speaking of the background to the project, Lambda Labs German based director, Steffen Kroschel, said, “The owners’ goal was to achieve a similar sound performance as it had in the Grelle Forelle Club in Vienna. Given the concerns of local residents, when Mr. Sauter surveyed the building, with its tube like architecture, the abstract idea of a ‘vibrating wall’ became more logical.” 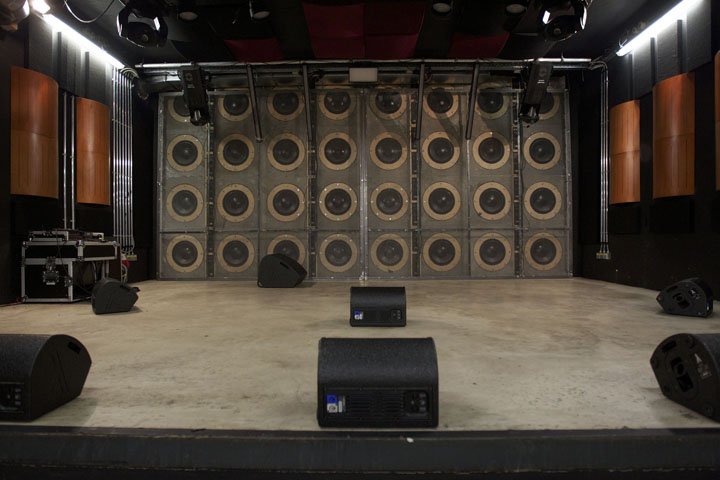 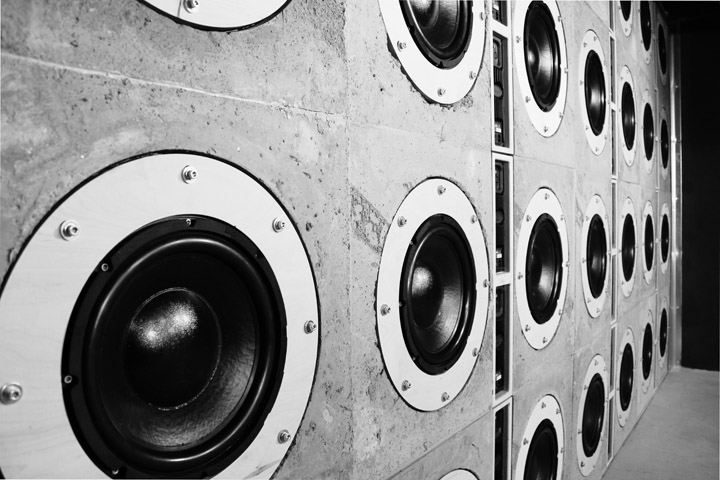 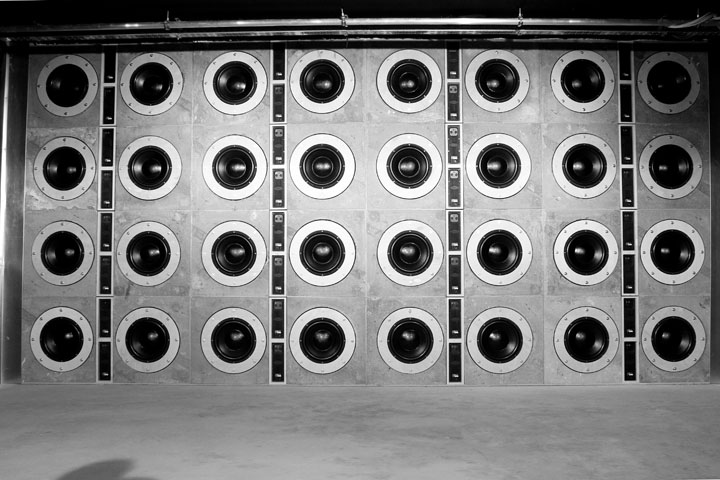 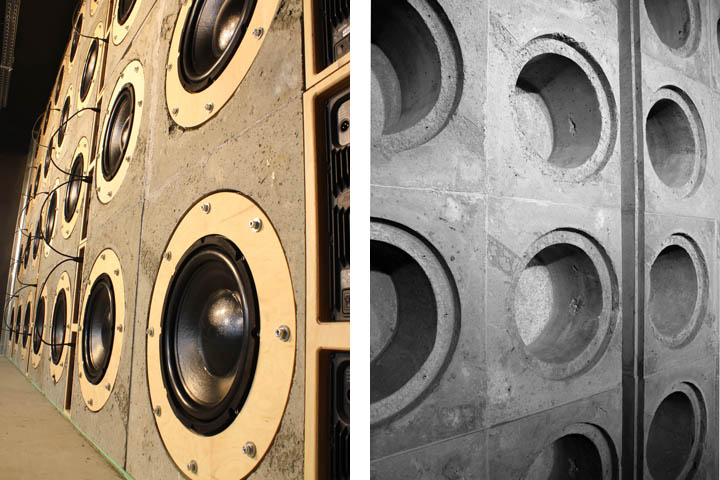 He contacted Lambda Labs where Mr. Nell supported the concept with simulation data, parameters and measurements — applying his knowledge of high performance concrete ‘closed box’ enclosures and amping. The drivers were developed especially for this application, going through 10 prototype stages, while the club owners helped with casting the concrete loudspeaker enclosures.

For the rear wall, behind the 6 x 5 meter stage, 400 kg special concrete blocks were cast and set into a 6 x 3 metre wall, using 13 tons of heavy concrete and a further 35 tons for the foundation — requiring a monumental effort. “It was extremely difficult to handle these enclosures with small forklift trucks and build the 50 cm deep low frequency absorber,” recalls Steffen. “Behind the wall is sand, and under the wall, Mr. Sauter chose material that is used for highway construction.”

Each concrete block serves as loudspeaker enclosure with pressure-resistant rear chamber which implements the perfect impulse response of a ‘closed-box’ design and maximizes the radiation resistance of the woofers through the acoustically hard surface. A self-enveloped 15″ speaker was produced and adapted to the unusual demands of this project. The single chassis are designed to act together like one single swinging wall — in a similar principle to a piston in a cylinder.

Steffen explains the concept further. “A perfect plane wave is created in the interior of the club, which naturally moves along the side walls and doesn’t induce any room modes. The rear of the main floor was converted into a single bass trap to absorb the incoming wave. The SUB thereby achieves an acoustical result that could never be reached even outdoors.”

And as for outside, there is virtually no noise escape and both Reinhard Nell and Wolfgang Sauter, agree that “such an operating range and evenness of the low frequencies is overwhelming”.

But to achieve this optimum performance, every driver needed be powered by its own dedicated amplifier module to take advantage of shortest cable runs, perfect matching power supplies and impedance data. As a long-term partner of Lambda Labs, Reinhard Nell chose Powersoft to provide amping for the ‘Wall of Bass’ while Lambda Labs supported the installation with items like amplifier mounting frames.

“As we have been using Powersoft amplifiers in our regular self-powered loudspeakers for four years, it was obvious to choose the company again for this project as we have a lot of experience with their modules, such as the Digimod 1500, which we use successfully in our subwoofer product MF-15A and our full range enclosure TX-3A,” continues Steffen.

“Their amplifiers deliver stable power also in the low frequency range, are small and lightweight and fulfill most of our demands regarding sound quality. For the project, we used the D-Cell, because it is very compact and still delivers plenty of power.”

The 32 Lambda Labs OEM CX 15″ ultra-long excursion drivers, with ± 25mm linear excursion capability set in housings made from special concrete. Each is driven by 800 Watt amplifying modules, with the maximum desired SPL reached at an excursion of only ±3mm. Therefore the ‘Wall of Bass manages with only 500 Watt peak music power during operation, which sets new standards of energy efficiency.

Via their 2-channel 32 D-Cell504 IS amp modules, Powersoft were able to deliver 25,600 watts amping power, including 4in voice coil with custom made venting system using hardened membrane.

In addition, special mid-high speakers generate a cylinder wave for longer throw and less room reflections while the DJ reference sound is provided by CX-1A and CX-3A self-powered monitors with Powersoft D-Cell modules.

Integrated within an elegant aluminum heatsink panel, the D-Cell504 IS provides an interface panel with input volume potentiometer, double XLR for mono input and link out or stereo input operation, four LED for Limit, Clip, Signal and Ready signalling, with a four-LED preset selection button to show the preset in use. Easy access to the DSP mounted on board, is further facilitated via remote control capabilities provided by Powersoft’s proprietary Armonía Pro Audio Suite.

“The data we measured melts in one’s mouth,” summarised Reinhard Nell. “The sound pressure level is beyond 140dB and absolutely equal at any point in the room (not that anyone would need such sound pressure levels). And you don’t have the possibility to feel 7Hz throughout your whole body every day.”

Summing up, Steffen Kroschel says that everyone who has played through the system has been hugely impressed. “For some it has changed their awareness of music.”

“Although we have not been able to find movie soundtracks with lower frequency response than 20 Hz, during our live presentations of the ‘Wall of Bass’, we play an original recording of a Challenger rocket launch, to give a natural idea of the breathtaking force. Another show element was to generate some sine waves down to 7Hz, demonstrating this outstanding response by also making the acoustic waves visible with smoke.”

Needless to say, the installation has attracted huge interest, from cinema exhibitors to club owners. “Some people think this has to be very expensive — but it costs the same or less than other high-end installations, depending on room size and situations.

“If the ‘Wall of Bass’ is capable of being integrated, due to the building’s architecture, the installation will result in absolutely perfect performance which can be adjusted to non concrete solutions. We now plan to realise some international projects to show the world what can be done with sound.”