David Gray is the Architainment Division Manager of Oasis Enterprises, a specialist systems integrator based in Dubai and Abu Dhabi.

His early career as a lighting designer was born in the Edinburgh Fringe Festival of 1987 after studying at Edinburgh University. He worked with Black Light for a decade, introducing Vari-lite moving heads to the Edinburgh Tattoo and beginning to develop an understanding of the interaction of people, technology and light. The interaction of people, technology and light, combined with Audio Visual and special effects, are the type of challenges and problems which continue to interest him. Focussing on the planning, and execution of project installations that combine the fixed elements of architectural projects with dynamic entertainment technology, Oasis Architainment works on a wide range of projects from frozen yoghurt stores to water parks.

He was recently involved in the design of the new WaterPark in Dubai, a very interesting project about which he tells us in the following interview.

ZioGiorgio.com: How did you become involved in a new design WaterPark ?

David Gray: The project was tendered competitively in 2011 as design build based on a loose outline specification “LED lights every 3-5 metres”, “adequate audio” “computerised control”. Oasis Architainment were selected by the main contractor – ALEC – and the contract signed in August 2011 for delivery in 12 months. Our challenge was to design systems which would work inside fibreglass tubes for the six Serpent Slides and the two world first hydromagnetic coasters : Dawwama and Falcons Falaj in the demanding environmental conditions of YAS Island, within a 3 month period.

ZioGiorgio.com: What is the Tornado in Yas Waterworld?

David Gray: The Tornado is a large 20m high funnel which forms the last section of the high adrenaline ride called Dawwama. The ride is world’s first and largest hydromagnetic Tornado waterslide and the interior sections and exterior of the Tornado structure formed part of our scope to add special effects including lighting, audio and projection.

ZioGiorgio.com: Why did you select the fixtures used ?

David Gray: I originally specified an RGB luminaire so I could match the quantity with the budget we had allocated to that section of the contract. Colour was always going to be a challenge as the fibreglass of the Tornado coloured blue and red/orange. The RGB luminaires sort of managed to provide the effect I was looking for on the frame structure but was lost on the fibreglass. I also had concerns the manufacturer would not rate them to 50 degrees and the heat management was insufficient for long term use. Looking to a 5 colour or 7 colour device, Oasis had previously tested the Desire D40XT throughout a desert summer in the Ferrari World G-Force. I was satisfied with its ability to perform and took some to site for a mockup which produced some better than expected results. “I didn’t want just another rainbow chase RGB exterior structure” states Gray, “I was also surprised at how easily we could apply subtle textures and change the steelwork to almost a gloss finish in some instances”. Compromise was reached and we reduced fixture quantities to budget leaving 48 units of Desire D40XT on the exterior and 12 units inside for the funnel. Another 30 units are installed across the Dawwama and Falcon’s Falaj inside the enclosed sections also proividing night time illumination of the exposed travelator sections. 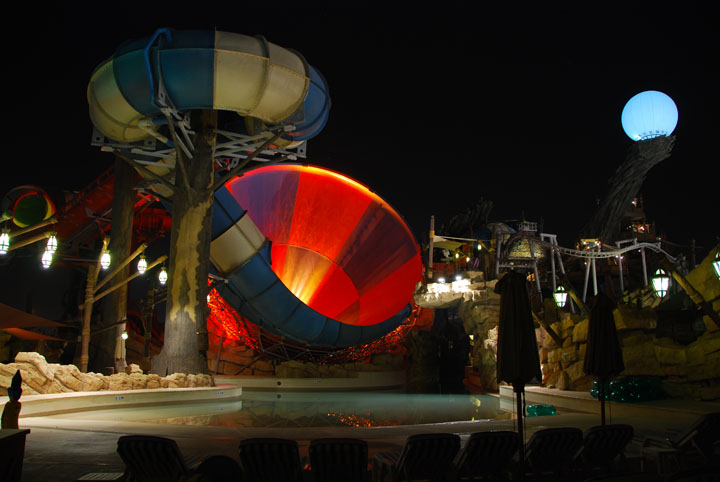 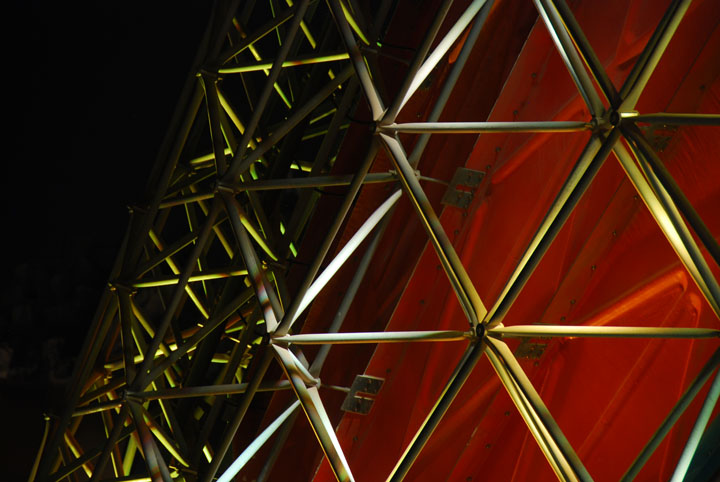 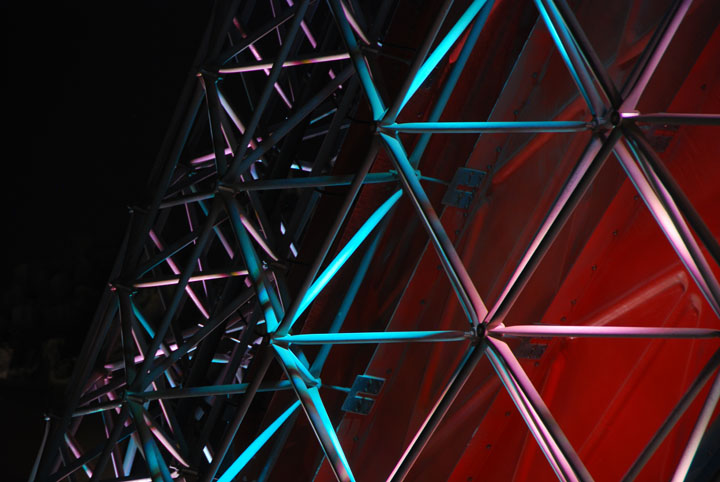 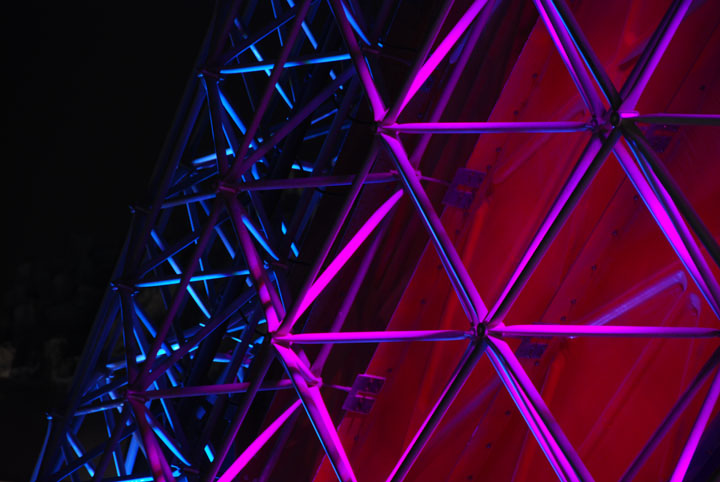 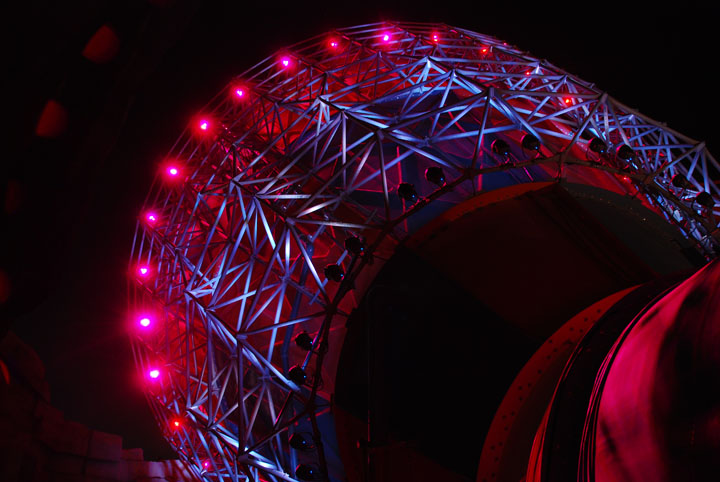 ZioGiorgio.com: Are these fixtures installed elsewhere in the park ?

David Gray: Unfortunately not as many as I would have liked ! There is a reason exterior LED luminaires are expensive – heat management. quality of LED binning and electronics are fundamental to keeping lights working outdoors in our market. We regularly see fittings and think “wow – they are cheap” but we also know they will fail in under a year. It is unusual for manufacturers to listen to dealers these days compared to 10 years ago. Karim Abboud – Oasis Lighting Product Manager – has a lot of experience with installations of exterior luminaires in the Middle East. His first comment on the early production units we tested was ” the LCD display will not last in the heat”. Earlier this year we saw ETC launch the Desire D40 XTi without the LCD display. We have yet to see failures of the display on installed units, however they are not visible during the daylight hours. Fortunately that does not affect us as we use a fully implemented RDM system to set addresses and test remotely.

ZioGiorgio.com: How are they controlled ?

David Gray: The guests can select and control their own rides using RFID tags. We made custom boxes which illuminate several extra rides depending on entry package purchase. These interface with the overall showcontroller for the park which is a Pharos LPC20 driving Alcorn McBride Binloops for content, Tempest enclosures for the projectors and ETC Net3 Gateways for RDM / DMX. I wanted a timeline based system to handle real time triggering of audio, projection, sfx and lighting. Each tube has 5 themes the rider can select and all the interface with driving DMX etc is through Pharos.

The exterior of Tornado is handled in the same with with several astronomically timed events around sunset to protect the LED’s from turning on when hot from solar radiated heat in summer and earlier in winter.

ZioGiorgio.com: What challenges did you face on the project ?

David Gray: Programming in winter – it was cold ! We were originally scheduled to commission and hand over in August which was a real worry due to heat and humidity inside these plastic tubes. The project was delayed 3 months and on one particular evening I made 45 trips up the stairs to ride the Serpent rides. In the dark, wet and with a wind blowing, 18 degrees is cold when your body has acclimatised to “normal” daytime of between 30-40 degrees.

Apart from the temperature, we had to develop a completely new language for programming the serpent tubes which had loads of 16 x 4 pixel matrices of LED installed in the fibreglass. Using walkie talkie and drawings and a new language or creative words, myself and the programmer managed to programme all tubes over a series of 5 nights.

Alex Panella was born in 1973 in the countryside of northern Italy. He developed an early passion for music and started playing the piano when he was 6 years old, graduating at the Conservatory of Siena in 1996. Since then, he has played in various classical, jazz and rock groups all around Italy, also “touching” some European countries and Africa. In 1993 he graduated in Sound Engineering at the “Scuola di Alto Perfezionamento Musicale” of Saluzzo, Italy and has worked as sound engineer both live and in his recording studio. In 1999 he graduated in Foreign Languages and Literatures at the University of Eastern Piedmont “A. Avogadro”, specializing in the factors that bias the comprehension and understanding of the English language. Since then, he has worked as a translator both in the professional entertainment and the medicine fields. He started his collaboration with ZioGiorgio back in 2001, which makes him one of the “oldest” members of the team.